Why are deuterated drugs important?

Deuterium (“heavy hydrogen”) is a stable, non-radioactive isotope of hydrogen with one proton, one neutron, and one electron. Deuterium thus effectively has twice the mass of hydrogen. In the pharmaceutical industry, some drugs have one or more of the hydrogen atoms in the molecule replaced by deuterium.

Deuteration may be desirable for certain drugs because the addition of the deuterium increases drug stability by lowering the rate of metabolism, giving the drug a longer half-life (this is due to the kinetic isotope effect). Deuterium can thus solve problems whereby a compound that seems effective in vitro has limited potency or observed toxic metabolites in vivo. Deuterated drugs also have a lower degree of epimerization. Some studies have shown that deuterating certain pharmaceutical compounds may reduce side effects and drug-drug interactions, improving consumer satisfaction and decreasing restrictions on taking other medications at the same time.

While patents on deuterated molecules have been issued since the 1970s, the first deuterated drug to receive FDA approval was deutetrabenazine in 2017. Since then, deuteration of drug products has become increasing pursued in search of more favorable pharmacokinetics for pre-existing drugs. Of course, this has led to a flurry of patent activity and a debate over whether adding deuterium to an existing molecule is novel and non-obvious. Many large pharmaceutical companies are beginning to include isotopic extensions with all their base patents.

Deuteration in medicinal chemistry was recently presented as a featured chapter in Annual Reports in Medicinal Chemistry (the abstract can be read here). This new push in the pharmaceutical industry has been discussed in Nature, Nature Medicine, and in the ACS Journal of Medicinal Chemistry.

Replacing hydrogens atoms with deuteriums is of course not necessarily a simple switch that can be performed at the end of a manufacturing process. Exact positions need to be targeted to translate to the desired in vivo response. Deuterated solvents will need to be used at precise stages during synthesis, and 100% deuteration of the target position(s) may not be attainable. It is important that as pharmaceutical companies develop these molecules, they maintain an understanding of the percent deuteration they are able to obtain and maintain.

One of the primarily methods of deuterium analysis is NMR, though NMR has limited sensitivity and requires a large volume of sample. It is also an expensive technique. High resolution mass spectrometry can offer more precise and quantitative results when applied effectively.

EKG Labs has been approached with a number of deuterated pharmaceutical compounds for deuterium analysis by LCMS and has been able to answer client questions and provide a wealth of data on the kinetics and stereospecificity of these deuterated drugs.

Primarily, EKG has been asked to precisely calculate percent abundance of deuterium in molecules or to calculate the overall percent of molecules “fully deuterated”, which could specify any number of desired deuteriums. For example, EKG spent a while working with a compound that has four positions targeted for deuteration.

However, this analysis has been complicated because it is not just a simple matter of looking for the expected mass of the final compound with 0, 1, 2, 3, etc. deuteriums. Calculations are complex due to naturally abundant isotopes of other atoms present in the molecule. For example, any chlorines in the molecule must be accounted for. 35Cl has a natural abundance around 76%, while 37Cl  has a natural abundance around 24%. Thus, an ion observed with a mass ~2 Da greater than an undeuterated chlorine-containing compound certainly represents the “heavy” chlorine isotope, but may also indicate that two protons have been exchanged for two deuterons. EKG has developed a method of propagating expected isotopic abundances across mass spec data in order to precisely calculate percent deuteration.

Depending on the nature of the project at hand, compounds have been analyzed over time in a variety of solvents, both deuterated and non-deuterated, in order to observe deuterium-hydrogen exchange rates at specific positions. Samples are analyzed using a UHPLC with Time of Flight (ToF) Mass Spectrometry. Some advantages of using this specific instrument include its low detection limits, its mass accuracy of less than 1 ppm for leveraging isotopic information, and its mass resolution over 22,000 to distinguish target analytes from matrix interferences. In some analyses, less than 1 mg of sample material was utilized.

If you are experiencing a challenge with deuterium in your product or need analytical services to support your product development, please contact us at 810-354-5229. 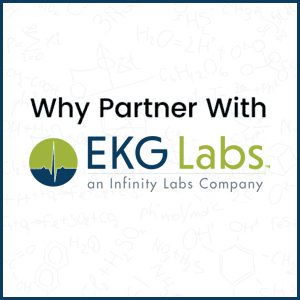